Solar Energy Use by Australian Households

The growth of solar energy use in Australia has been rapid and driven by the high cost of electricity.  According to information provided by the Australian Bureau of Statistics in 2014 one fifth of all Australian Households use solar energy.

The figures for growth in use of solar panels has also been reported and showing very strong growth.  The ABS found that in 2011 only around 5% of households had solar panels.  Within just three years this had grown to 14%.

Where is Solar Energy Used in Australia?

The uptake and solar energy use in Australia varies by state.  South Australians have the highest level of use(24%), followed by Queensland.  The third highest usage is in Western Australia (16%).  The other states make less use of solar energy as shown in the graph below. 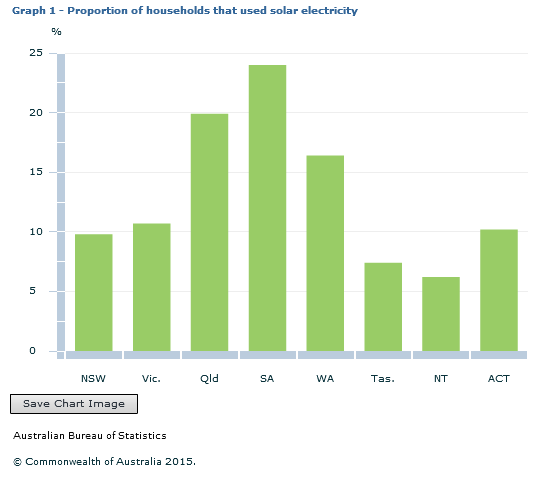 The increase in solar energy use in Australia has been led by the high costs of electricity and by various types of government subsidies.  The generosity of government subsidies is now decreasing.  However many Australians now see the value of investing in solar panels and with the advent of solar batteries further grown of solar energy use in Australia is predicted.

Statistics quoted in this article are sourced from Australian Bureau of Statistics Environmental Issues: Energy Use and Conservation, March 2014. Cat no 4602.0.55.001

Solar Energy Use in Australia was last modified: July 29th, 2017 by editor